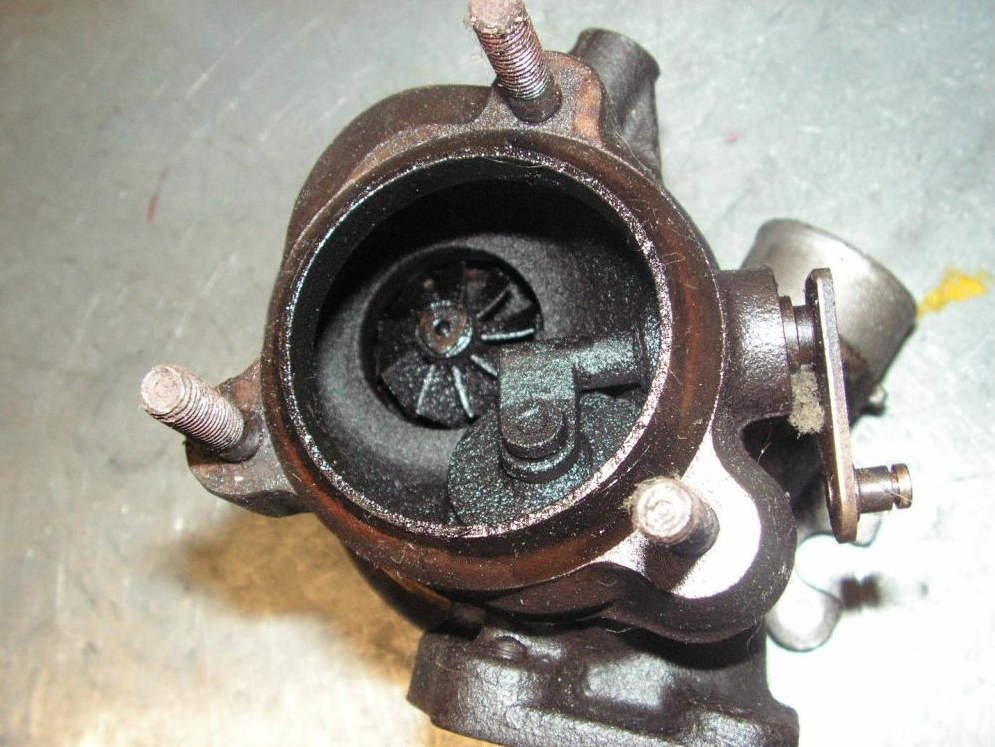 Oil leakage from the turbocharger: causes and remedies.

Most often turbo owners come to us and our colleagues with the words “turbo’s leaking oil, how much will it cost to fix, is there a good used one? Then some variant is chosen according to the text or a plug is put. But in fact, the reason for oil leakage in most cases is not a turbocharger but its wrong installation or improper engine maintenance and operation. To understand what causes a “turbo to leak oil” let’s look at the following points:

Lube oil inside the cylinder

The oil is fed under pressure into the turbocharger bearing housing via a pressure line. On flowing through the bearings at high speed the oil is mixed with the air (crankcase gases). At the outlet of the bearings, the oil mixed with air is already a kind of foam which by gravity first flows down the bearing housing of the turbocharger, and then through the drain line into the engine oil sump. If there is an obstacle in its way it will start to collect in the housing. When the level of oil foam exceeds the level of the seals, oil will begin to flow into the turbine and compressor wheel housings (hot and cold volute) through the gap in the sealing ring.

Some ‘leaks’ are caused by the air filter. In an air filter (wet filter) that is already contaminated with oil or has insufficient capacity, air passing through it at high velocity can trap oil droplets and carry them into the compressor housing. This “leakage” can only be observed at the compressor outlet and to fix it either the oil in the filter has to be changed or the filter has to be replaced with another one.

Oil at the compressor outlet

A dry type air filter, after prolonged operation, becomes clogged with dust particles, its resistance increases and consequently the pressure drop across it increases. A small vacuum occurs at the compressor inlet. This vacuum does not affect oil leakage when the engine is running at medium or high loads, because there is excess pressure behind the compressor wheel. When the engine is running at idle speed or under low loads, a vacuum is not only generated at the compressor inlet, but also at the compressor outlet. If this condition persists for a while oil will be sucked out of the turbocharger bearing housing and flow into the engine intake manifold. The solution to such a problem is fairly straightforward. You can either install a sensor between the air filter and the turbocharger that will indicate when you need to change the filter, or you can have the filter changed as specified by the car manufacturer.

Oil at the turbo outlet

Usually, oil leakage at the turbine outlet is an indication of problems in the drainage system. Something is causing the oil foam to rise above the level of the seals. It must be ensured that the drain line is in the upright position (a maximum of 35 degrees from the upright position is allowed) and that it has no bends in which oil can collect. It must also be ensured that the drain line is connected to the engine in a position that does not create additional resistance to oil flow and is above the oil level in the crankcase.

Factors affecting the service life of the turbocharger (turbine).

Foreign objects that often fall on the turbine wheel blades include: broken off parts of valves and combustion chamber; improperly installed gasket (parts of the gasket may come off and fall into the exhaust manifold); bolts, nuts and washers that fall into the exhaust manifold when replacing the turbocharger; broken off parts of the engine’s pistons. All of these objects, even if insignificant in size, cause serious damage to the turbine wheel.

Damage to the turbocharger can also be caused by elevated exhaust temperatures when the machine is operated at high altitudes. Any engine that is operated at temperatures close to the limit at sea level will exceed these temperatures at an altitude of 1500 m above sea level. Also operating at such altitudes may cause the turbocharger’s maximum shaft speed to be exceeded. It is therefore necessary to modify the fuel system in accordance with the manufacturer’s requirements. In addition, the increase in the exhaust gas temperature is significantly affected by: late ignition, poor mixture and late injection timing.

Increased inlet resistance, which may be caused by an air filter, damaged connections or insufficiently dimensioned fittings, reduces the amount of air that enters the cylinders and increases the temperature of the exhaust gases. Increased intake resistance and operation at high altitudes can lead to damage to the turbine wheel housing and even to damage to the turbine wheel itself due to high temperatures.

If the air filter is not changed as required by the manufacturer, there is a high risk of dirt deposits in the compressor wheel housing, resulting in reduced air flow to the cylinders and further overheating. Also loose gaskets in the intake and exhaust manifold lead to reduced air supply.

Turbocompressor damage can be virtually eliminated by keeping foreign bodies away from the turbine and compressor blades, exceeding the allowable turbocharger operating temperatures and by ensuring that the turbocharger is supplied with the correct amount of quality oil.

Today, an increasing number of modern turbochargers are equipped with electronic boosters. Their main problem is that the lifetime of{...}

Let’s look at a few of the options that may come in the way of the average person browsing the{...}

In the latest episode of the ABB Decoded podcast, Daniel Bischofberger, CEO of Accelleron (formerly ABB Turbocharging), discusses the critical{...}